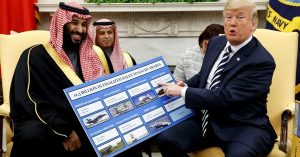 The global alliance for evil is the system that’s behind the current reality, which some call “permanent war for permanent peace,” and others call “perpetual war for perpetual peace,” but it’s the same thing no matter what it’s called: the ‘national security’ system that exists today, and that was accurately foreseen (and dramatically embellished) in George Orwell’s allegorical novel, 1984. What it is, in reality, is the coerced taking from the public so as to further enrich the aristocracy. And here’s how this system functions, in reality: the aristocracy are the billionaires who control their country’s government and own controlling blocs of stock not only in the privately owned news-media but in the privately owned firms (such as Lockheed Martin and BAE) that make weapons which are sold only to their own government and to the governments which are allied with it. Those governments collectively are called ‘allies’, and thus constitute an international team of aristocracies whose weapons are made by their team and are used against any governments which this team of aristocracies chooses to label as the team’s ‘enemies’. These ‘enemies’ are any nations that are targeted to be conquered by this aristocratic team.

This article is a snippet taken from Mint Press News. You can read the entire article here. 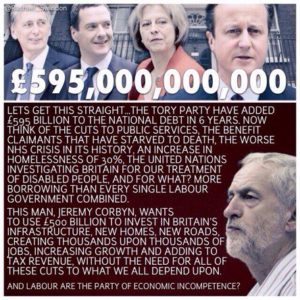 So, given the figures in the graphic (public domain and uncontroversial), exactly why do people imagine the Tories are more economically competent than Labour?
It wouldn’t be because they’re constantly told this by the MSM (mainstream media)?
Goebbels himself stated that if you repeat a lie often enough, people will come to believe it…